Aufgaben
Lösungen
Aufgaben
Download als Dokument:PDF
1.
Outline the information about what machines do today.
2.
Analyze the means by which Zeynep Tufekci and Paul Paetzel convey their attitude towards recent technological developments. Give evidence, referring to the text and the illustration published with it.
3.
Choose one of the following three tasks:
3.1
"We don't need to reject or blame technology. This problem is not us versus the machines, but between us, as humans, and how we value one another."
Explain the quote and discuss the author’s position considering to what extent technology does influence human relationships. Refer to the article and your knowledge about the issue.
3.2
Compare technological developments as described in the article to similar developments you are familiar with from a work of literature or film. Assess the impact these developments have on people’s lives.
3.3
For an international youth conference on “Our future in an automated world”, you have been asked to deliver the opening speech. Using ideas from the text as a starting point, write a speech in which you comment on a machine-run society in the future.
#article#speech
Material 1 Excerpt from the article The Machines Are Coming By Zeynep Tufekci 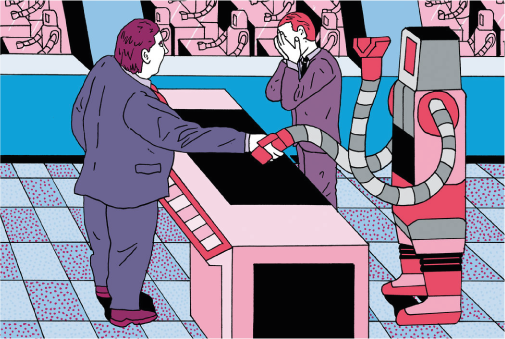 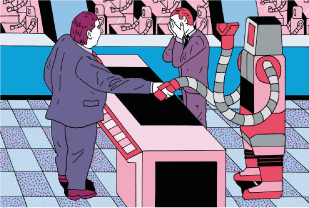 Paul Paetzel
$\;$
[…]
A robot with emotion-detection software interviews visitors to the United States at the border. In field tests, this eerily[1] named “embodied avatar kiosk” does much better than humans in catching those with invalid documentation. Emotional-processing software has gotten so good that ad companies are looking into “mood-targeted” advertising, and the government of Dubai wants to use it to scan all its closed-circuit TV
5
feeds.
Yes, the machines are getting smarter, and they’re coming for more and more jobs. Not just low-wage jobs, either.
Today, machines can process regular spoken language and not only recognize human faces, but also read their expressions. They can classify personality types, and have started being able to carry out
10
conversations with appropriate emotional tenor[2]. Machines are getting better than humans at figuring out who to hire, who’s in a mood to pay a little more for that sweater, and who needs a coupon to nudge[3] them toward a sale. In applications around the world, software is being used to predict whether people are lying, how they feel and whom they’ll vote for.
To crack these cognitive and emotional puzzles, computers needed not only sophisticated, efficient
15
algorithms, but also vast amounts of human-generated data, which can now be easily harvested from our digitized world. The results are dazzling. Most of what we think of as expertise, knowledge and intuition is being deconstructed and recreated as an algorithmic competency, fueled by big data.
But computers do not just replace humans in the workplace. They shift the balance of power even more in favor of employers. Our normal response to technological innovation that threatens jobs is to encourage
20
workers to acquire more skills, or to trust that the nuances of the human mind or human attention will always be superior in crucial ways. But when machines of this capacity enter the equation[4], employers have even more leverage[5], and our standard response is not sufficient for the looming crisis.
Machines aren’t used because they perform some tasks that much better than humans, but because, in many cases, they do a “good enough” job while also being cheaper, more predictable and easier to control
25
than quirky, pesky[6] humans. Technology in the workplace is as much about power and control as it is about productivity and efficiency.
This used to be spoken about more openly. An ad in 1967 for an automated accounting system urged companies to replace humans with automated systems that “can’t quit, forget or get pregnant.” Featuring a visibly pregnant, smiling woman leaving the office with baby shower gifts, the ads, which were published in
30
leading business magazines, warned of employees who “know too much for your own good” — “your good” meaning that of the employer. Why be dependent on humans? “When Alice leaves, will she take your billing system[7] with her?” the ad pointedly asked, emphasizing that this couldn’t be fixed by simply replacing “Alice” with another person.
The solution? Replace humans with machines. To pregnancy as a “danger” to the workplace, the company
35
could have added “get sick, ask for higher wages, have a bad day, aging parent, sick child or a cold.” In other words, be human.
I recently had a conversation with a call center worker from the Philippines. While trying to solve my minor problem, he needed to get a code from a supervisor. The code didn’t work. A groan escaped his lips: “I’m going to lose my job.” Alarmed, I inquired why. He had done nothing wrong, and it was a small issue. “It
40
doesn’t matter,” he said.
He was probably right. He is dispensable. Technology first allowed the job to be outsourced. Now machines at call centers can be used to seamlessly generate spoken responses to customer inquiries, so that a single operator can handle multiple customers all at once. Meanwhile, the customer often isn’t aware that she is mostly being spoken to by a machine.

45
This is the way technology is being used in many workplaces: to reduce the power of humans, and employers’ dependency on them, whether by replacing, displacing or surveilling them. Many technological developments contribute to this shift in power: advanced diagnostic systems that can do medical or legal analysis; the ability to outsource labor to the lowest-paid workers, measure employee tasks to the minute and “optimize” worker schedules in a way that devastates ordinary lives. Indeed, regardless of whether
50
unemployment has gone up or down, real wages have been stagnant or declining in the United States for decades. Most people no longer have the leverage to bargain.
[…] It’s easy to imagine an alternate future where advanced machine capabilities are used to empower more of us, rather than control most of us. There will potentially be more time, 60 resources and freedom to share, but only if we change how we do things. We don’t need to reject or blame technology. This problem
55
is not us versus the machines, but between us, as humans, and how we value one another. Source: Tufekci, Zeynep. “The Machines Are Coming.” The New York Times. April 18, 2015. Accessed March 13, 2016. http://www.nytimes.com/2015/04/19/
opinion/sunday/the-machines-are-coming.html.
Annotations
[1] eerily: strangely
[2] tenor: tone
[3] to nudge: to encourage someone to do something
[4] to enter the equation: to become something that must be considered or dealt with
[5] leverage: power, advantage
[6] pesky: annoying
[7] billing system: process of stating payment terms, German: Abrechnungssystem