$\blacktriangleright$  Answer the following questions using your own words as far as is appropriate. Quote correctly.


1.
Describe how Edinburgh has changed since 1947, taking into account the impact the Festival has had on the city.
(20P)
#description
2.
Outline how Edinburgh, as a "city of culture" (ll. 60/61), compares with other cities.
(10P)
#comparison
3.
Examine how the writer employs criticism of the city and its Festival to get her message across. Analyse three stylistic devices she uses in the process.
(20P)
#stylisticdevices

$\blacktriangleright$  Choose one of the following topics. Write about 200 to 250 words.


1.
Regional identity is something we should hold on to in today‘s globalised world. Do you agree?
(10P)
#opinion
2.
Art does not exist only to entertain, but also to challenge one to think, to provoke, even to disturb, in a constant search for truth" (Barbara Streisand, *1942; US singer and actress). Comment on this statement.
(10P)
#comment
3.
You are going to to set up an English drama group at your school and have already chosen a play by an English-speaking author. Write a text for school website introducing the play and the reasons for your choice in order to find suitable actors and actresses.
(10P)
#creativewriting
4.
Describe, interpret and comment on the following cartoon.
(10P)
#cartoon 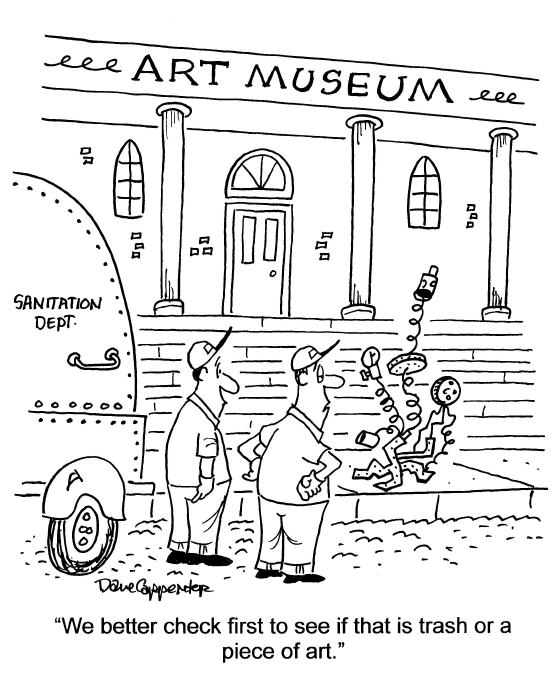 Abb. 1: "We better check first to see if that is trash or a piece of art." 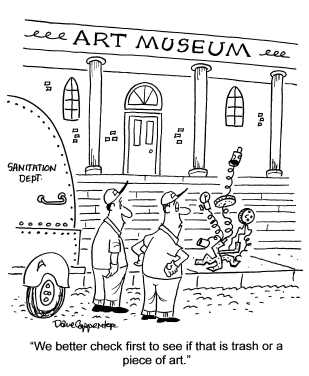 
In her article "Festival City title fits Edinburgh", Joyce McMillan describes how the city has developed during the last half century considering the influence of the cultural event.
Einleitung
Kommentar anzeigen

Einleitung
In 1947, when the festival was initiated by a group of artists from London around conductor Rudolf Bing (Text, line 26-28) and supported by the Lord Provost John Falconer (Text, line 29 f.), the Scottish capital was a rather sleepy provincial town with few restaurants and pubs. Since then the population has been growing constantly from 300.000 in the 1950s to 600.000 in 2030 (Text, line 15-16). Making Edinburgh the city with the highest population in Scotland. (Text, line 17-18). Even though the recent years showed an economic recession, the economy in Edinburgh has developed positively.
Hauptteil
Kommentar anzeigen

Hauptteil
The contribution of the art festival to this economic success can be weighed in at an estimated amount of 250 million pounds per year (Text, line 44-45). Besides the economic success, the city also became famous for its arts and culture throughout the festival (Text, line 39-40). However, the prestige of the event has not only changed the perception of Edinburgh throughout the world, but also within its own boundaries (Text, line 49-51). It has created a new self-confidence among its citizens, which again has played a pivotal role in the development of a Scottish identity over the past 50 years (Text, line 52). The festival has also led to a renaissance of the city‘s public spaces (Text, line 39) and has provided chances and inspiration for many local artists as well as unique cultural experiences for its people (Text, line 46-48). In a recent survey, Edinburgh has been rated "the happiest city in the UK, thanks to its consistently high quality of life" (Text, line 19-20).
Kommentar anzeigen


The city and its council have supported the Edinburgh Festival since its beginning in 1947 by backing it both financially and logistically (Text, line 29-33). The event is the key element that turned it into a "city of culture" (Text, line 60-61) a long time before the phrase was even coined, giving it a head start over many other metropolises (Text, line 58-64). As Edinburgh profits substantially from the effects of the happening, the council has not cut back on its arts budget, in stark contrast to a vast number of municipal governments in the rest of the country (Text, line 67-69).
Kommentar anzeigen

This shows how the attitude in the Scottish capital differs from that in many other places. It is not a flash in the pan; it is about sustaining a long-term development (Text, line 68-73). Only in such secure circumstances can a town truly become the home of artists. This was obvious in the 1980s when culture became fashionable and numerous cities tried to adopt a new image, falsely believing the attribute of being a "city of culture" (Text, line 60-61) could be earned quickly and easily in order to attract tourists (Text, line 53-57).
Kommentar anzeigen


The article begins with the author referring to the citizens of Edinburgh, who tend to complain when asked about their city‘s situation (Text, line 4-5). For example when it comes to managing the extension of the public transportation system (Text, line 5-6) or other projects such as the redevelopment of a swimming pool in Leith a suburb of Edinburgh (Text, line 6-9), the municipal government is presented as ineffective in its decisions (Text, line 9-12). Joyce McMillan illustrates the criticism by using an exaggeration claiming the work on the tram system is "never-ending" (Text, line 5). However, the negative image of Edinburgh in the opening paragraph is misleading.
Kommentar anzeigen

When she prefers to grumbling and complaining citizens (Text, line 33), who whinged about an invasion of festival-goers, traffic jams and other annoyances that come with the event (Text, line 34-35), her criticism has an analogous function. By pointing out the negative factors, the benefits which she outlines in the following lines (Text, line 37-52) appear even greater, especially since she writes that despite their constant discontent, the people of Edinburgh actually know very well how much they profit from the festival and would never want to lose its fine reputation (Text, line 35-36). Again, McMillan uses stylistic devices to stress her point.
Kommentar anzeigen


In the age of globalization nothing seems to be far away anymore. Not only goods can be transported easily from country to country or even from continent to continent, but also people can travel wherever they want to go. We are eating bananas from South America, wearing clothes from India and communicating via the Internet with friends all over the world. We are able to speak with nearly everyone by using the English language. We are globalized and yes this is great.
Einleitung
Kommentar anzeigen

Einleitung
Even though I am a supporter of the globalization, I am also aware of the fact that this could mean loss of cultural identity. This is why I am not only a supporter of globalization, but also of reminding ourselves of our regional traditions, our cultural identity. Sometimes people seem to be ashamed of their dialect, which they do not have to be at all. Dialects are a remainder of past times where people were speaking languages concerning their regional decent. Being able to speak such a dialect is a talent and nothing which you have to be ashamed of. Furthermore, traditions like wine or beer festivals or even the carnival shows where we come from and make sure that we are still connected to our heritage.
Hauptteil
Kommentar anzeigen

Hauptteil
While talking about globalization we should not only try to be in favour of it, but also to remind ourselves of the traditions we have grown up with.
Schluss
Kommentar anzeigen


Art has always been part of modern men. It has several faces, such as music, plastic arts, arts’ history, dance. Streisand claims that art does not only exist to entertain us, but entertainment is one distinct function of art. Furthermore, there is also the possibility to express feelings, emotions and also our own history through art. Music can make us feel depressed or happy, whereas we can show these feelings also by dancing to music. Especially contemporary dance is a way to express powerful emotions. On top of that, art such as paintings can help us to think in a critical way about the past. When we look at a painting from medieval times seeing women get burned because they were accused of being witches, this could remind us of the fact that such history repeated itself in another context, e.g. the Nazi regime. The fact that artists have often been persecuted reminds us of the threat art can apparently pose to regimes, which do not want people to think on their own. Art has been and should ever be an important part of our society since its function lies not only in entertaining us, but is enabeling us to express and share our emotions.
Kommentar anzeigen


Arthur Miller’s classic is set in the 17th century in Salem, Massachusetts. It is about a village in turmoil due to allegations of witchcraft against the inhabitants Abigail, Elizabeth Proctor and John. Proctor gets accused by Abigail, who had an affair with Proctor’s husband John, of black magic. John ends up admitting to adultery to protect his wife and is eventually sent to the gallows together with some other villagers, before reason finally returns to the community. Miller wrote the play at the height of the Cold War as a parable against the anti-communist witch-hunts in the US in the 1950s.
Even though the setting might be far away from our today world, the themes of The Crucible are still relevant. These themes include how jealousy can turn into hatred, how irrational rumours can become arguments and how lies can ruin reputations.
Kommentar anzeigen

If you are interested in playing a part of this play, then you should come and talk to us. What can we offer to you? We can offer you to be Don’t be shy and come up to our first meeting on February 5 at 12 o’clock at the drama club in room 320.
Kommentar anzeigen


The cartoon created by Dave Carpenter deals with modern art and its reception. In the picture we can see two men standing in front of an art museum. On the left there is a part of a car which has “Sanitation Dept.” written on it. The two men are looking at what could be a sculpture made of different kinds of metal. One of them tells the other “We better check first to see if that is trash or a piece of art.”
Einleitung
Kommentar anzeigen

Einleitung
The cartoonist mocks the fact that nowadays it is often impossible for the average observer to determine whether what they are looking at is of artistic value or simply a pile of rubbish. In other words, art can often no longer be recognized as such independently of its surroundings or because of its obvious beauty or the outstanding skill needed for its production. It has become common that one needs an artsy context to understand art.
Hauptteil
Kommentar anzeigen

Hauptteil
With this criticism of modern art the cartoonist does not stand alone. A lot of people are out of their depth when confronted with paintings or sculptures they find difficult to understand. Making sense of some modern art does not mean simply looking at it and deciding whether one likes it or not. These days it is often a question of discovering the message artists want to convey or the feelings they are trying to express, which might prove a rather difficult thing to do – at least as difficult as admitting that one cannot make head or tail of a work of modern art.
Schluss
Kommentar anzeigen