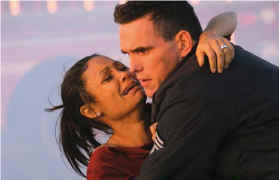 Speech bubble:“We demand our country back!”
[Abb. 1] Hier zum Bildnachweis:
Keshia Thomas and Officer Ryan (Crash) put their personal safety at risk for the sake of others.
Compare the circumstances in which they do this and their reasons for doing so.

The given text is about a black teenager named Keshia Thomas who protected a white man when he was attacked by anti-Ku Klux Klan protesters.
The incident happened in 1996, when the KKK held a rally in Thomas' liberal hometown Ann Arbor. The anti-KKK demonstrators, who Keshia was with, spotted a white man nearby who they suspected to be a KKK supporter. The man wanted to run away, but quickly he was encircled by the crowd who started to kick him and hit him with wooden sticks. Keshia reacted immediately and protected the man by throwing herself on top of him, even though it put her own safety at risk. She felt obliged to help the man when nobody else did.

Her actions are still seen as remarkably brave and kindhearted. What made it so exceptional is that Keshia Thomas saved someone who is probably a racist. It is highly doubtful that he would have done the same for her. Also, she was the only one to think clearly and take action when mob mentality had taken over.

Keshia had several reasons for the way she acted. One of them was her religious faith. But even more important was the fact that she had experienced violence herself. In the situations when she was hurt she wished that someone would have helped her. She would have been glad if someone had defended and protected her, just like she protected the man. Keshia Thomas believes that “nobody deserves to be hurt” (Text, line 34f.) and acted according to that perception.

Officer Ryan from the movie Crash also puts his personal safety at risk for someone else. The movie shows several interwoven storylines that revolve around racism and prejudices. The plotlines show a number of people from different ethnic groups in Los Angeles whose fates are entangled with one another.

When Officer Ryan, a white policeman on duty, comes across a car accident he stops and runs to a damaged car. The car is lying upside down on the road and Ryan wants to save a woman that is trapped inside it. Since the tank is leaking and another car has already caught fire, the car is about to explode soon. The woman inside is Christine, a black woman he had sexually harassed the night before. When she recognises him, she panics and pushes him away. But Ryan manages to calm her down and pull her out of the car at the last second. Right after he saved her, the car bursts into flames.

In his previous encounters with coloured people, Ryan's racist actions and comments show that he is racially biased and assumes white people to be more competent. When he pulled Christine and her husband Cameron over the night before the accident, he used his power as a policeman to molest Christine under the pretence of searching her for weapons.

In the first place, Ryan's reason to help Christine is his profession as a policeman. It is his duty to save lives and help others. But when he recognises Christine, the viewer can tell that Ryan feels compassion for her and perhaps he also feels guilty. This incident is a chance for him to make up for his past mistakes and it shows that he also has positive character traits.

Summing up, both Keshia Thomas and Officer Ryan are confronted with racial prejudices and help a person with a different skin colour. While Keshia and the man she saved were complete strangers, Ryan and Christine had met before.
The topic of racism and prejudices is shown from different angles. Keshia is not biased and protests against racism. Ryan, on the other hand, is shown to have racist traits. Both characters are examples for the fact that prejudices can be overcome, no matter what happened before.