Choose ONE of the following:

Comment on this statement with reference to Lily in the novel Half Broke Horses.

Some years ago the British newspaper Daily Express published a special edition
with the following title page.
Comment on its message. 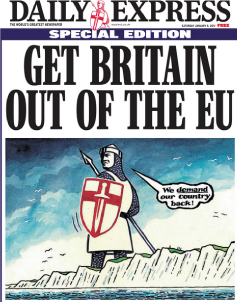 $\blacktriangleright$ Comment on the statement and refer to the book
Tipp

Roosevelt‘s statement “True individual freedom cannot exist without economic security and independence.” dates from 1944 and refers to the economic and social situation of America during the Second World War, when many people had no job and no money. Roosevelt, president of the United States of America at that time, wanted to clarify that people can only have a good and fulfilled life if they have jobs, income and security. Additionally, he intended to convince the American people that it was his ambition to ensure good living conditions.

Lily Casey Smith, the protagonist of the novel Half Broke Horses, is an example that one can reach personal fullfillment without economic independence and security.
Since she was a child, Lily had to work hard on her parents‘ ranch to ensure the survivability of her family. Due to the social circumstances in the early 1920s, her father, Adam Smith, rather supports his son to go to school and spends the money that was originally provided to pay his daughter‘s school fees elsewhere. As a consequence, Lily can neither finish school nor get a diploma. In Adam‘s opinion, women don not need to be educated anyway since they are supposed to marry, raise children and let their husbands earn the money needed to sustain the family.

Although Lily grows up under these prejudices of her dad and also of society, she does not let anybody demoralise her. Rather, she takes the advice of her teacher Mother Albertina who believes in her and encourages her not to waste her abilities but to become a teacher or a nurse.
Thereupon, Lily takes off to Red Lake, riding 500 miles on her horse all alone without a guarantee for anything and makes it finally to a teacher at the age of only 15.

However, when the First World War ends, 18-year-old Lily is fired becauce jobs should be available for the men coming back from war. Nevertheless, she does not let it discourage her. She moves on to Chicago and becomes a maid. But due to her stubbornness, she gets fired.
But she still does not give up. In fact, she finds a new job and even finishes high school attending school, after work. On top of that, she marries Ted, who later turns out to be a bigamist, having taken all her money.
After having lost everything she has built on, she moves back to Red Lake to teach there again.

Having returned, she suffers another setback. Her sister, who became pregnant without being married, commits suicide because she was reduced to despair by the prejudices of society. Once more, Lily has to learn that not everybody can live just the way he or she wants to, but that one needs to stick to the guidelines of the surroundings. After having taught another spell, encouraging the kids to fight for their dreams and to try to become whatever they want to be, Lily marries, inherits her parents‘ ranch, gets children and finally settles down.
Although life on the ranch is hard and Lily and her family need to fight tough challenges she finally feels arrived home.

Coming back to Roosevelt, in my opinion, Lily Casey Smith provides counter-evidence to his statement. She has always fought for her dreams proving her parents, her teachers and especially herself that everything is possible and that there is no need to give up, no matter how hard life seems. In spite of the difficult political and social situation in which she grew up and despite the uncertainty of what tomorrow brings, Lily always takes courage and demonstrates that even a woman in the 1920s can reach individual freedom, maybe even a “greater” freedom than the freedom of somebody who does not have to fight for it.
Of course life would have been a lot easier for Lily if there was economic security and independence, but she proves that getting a happy and fullfilled live is still possible.

$\blacktriangleright$ Comment on the message of the title page
Tipp

The United Kingdom, often also called ”Britain”, is a European state consisting of four countries: England, Scotland, Wales and Northern Ireland. Even though it joined the European Union in 1973, the UK is not a member of the monetary union within Europe. When the EU adopted the Euro in 2002, the UK decided to hold onto the Pound Sterling.

The British newspaper Daily Express published a free special edition on January 8, 2011.
On its title page you can see the headline "Get Britain Out Of The EU" in capital letters and a very large font size. Below, there is a drawing of a knight wearing a helmet, a chain armour, a shield and a lance. The shield is painted with a flag, presumably the English one, and a sword in the middle of that flag. The knight is also the logo of the Daily Express, which is printed on the very top of the page. Next to the knight a speech bubble saying ”We demand our country back!” can be seen.

The knight is standing behind white cliffs, probably the chalk cliffs in Dover. Dover is England‘s most important connection to mainland Europe due to the Channel Tunnel and the ferry connection to France.
The sky in the back is dark and a storm seems to be coming. From the Eurosceptics‘ point of view this is a symbol of the European Union and its politics.

With the title page, the newspaper expresses its negative view on the UK‘s membership in the European Union. A lot of people think that Britain is better off out of the EU, and recent surveys have shown that the majority of Britons favour leaving the EU.

However, there are arguments that undermine the views and opinions of both sides.
A benefit that would come along when leaving the EU is that the UK would gain control of its own borders and migration within the country. A lot of British people fear that due to the freedom of movement to the EU, too many immigrants come to the UK and take their jobs. Also, it is feared that the British cultural, economical and political individuality is threatened.
Another reason why a lot of Britons want to leave the EU is that they feel they are not a sovereign state. EU law follows the precedence principle and is superior to the national laws of member states.
Furthermore, a lot of Eurosceptics argue that the UK would not have to pay the EU membership fees anymore, which are quite high.

There are also a lot of drawbacks that would arise as a result of the UK leaving the EU.
For example, the freedom of movement within the EU member states would not apply anymore and it would become a lot harder for British citizens to work outside the UK.
Not only does the EU guarantee the freedom of movement, it also ensures the free movement of goods, services and capital. Leaving the European Single Market would mean a crucial disadvantage for the British economy as the EU is the UK‘s biggest trading partner. Within the European Union, goods can be traded duty free as member states have removed customs barriers. The benefit which arises from this far outweighs the membership fees.

Having considered different perspectives of this topic, I think that the drawbacks that would go hand in hand with leaving the European Union outweigh the benefits. British people should embrace the changes to their country and although most Britons are sceptical towards the EU, their culture is not threatened. The UK should rather make use of the interdependencies within the EU and the consequent economic benefits.